Pablo de la Riva, Founder
With the growing adoption of online financial transactions, every individual is now a potential target of cyberfraud. For banks, rampant increase in cyberattacks has put forth new challenges of not only monitoring and ensuring the legitimacy of each transaction, but also the individuals carrying out the transaction. Having the vision to protect financial institutions from the increasingly sophisticated cyberthreats, buguroo provides robust and flexible next generation solutions to enable trusted users to carry out financial transactions securely. Following a two-step authentication process, buguroo verifies the user and the transaction session by tracking users’ behavior and device properties and building a behavioral profile in real time.

Moving beyond building a generic profile of the bank’s customers, buguroo takes a nuanced approach in customer authentication. The company focuses on detecting fraud in the online banking sessions through ‘bugFraud Defense’— the proprietary engine that gathers data at every stage of the transaction and analyzes the users’ behavior throughout the session. The company then leverages the deep learning algorithms and cognitive analytics to predict and prevent fraud such as phishing, malware, webinjects, and form-grabbers. bugFraud Defense gathers human biometric patterns such as mouse acceleration and keyboard velocity to identity the variance in the accepted user behavior and identifies fraudsters or bots trying to impersonate legitimate users. The company also takes into account data from mobile sensors such as accelerator and gyroscope while building the profile of a bank’s customer.

The real-time profiling of users guarantees the legitimacy and precision of the user profiles. The firm prevents cyber fraud by creating a profile based on six parameters—devices, networks, content, omni-channel, biometrics, and threat intelligence. Pablo de la Riva, founder of buguroo says, “With biometrics, artificial intelligence, and advanced neural networks, we learn what makes a user, human.” The company’s solutions can detect the exact time of a fraud or a compromise in any particular session by valuating device risk, geolocation data, user’s patterns, and fraud intelligence data.
It uses a proprietary pattern similarity-based mechanism that can detect new malware campaigns beyond the known signatures or blacklist by analyzing web page navigation and classifies anomalies to avoid false positives and false negatives. Delivered through cloud, buguroo’s customers can save on bandwidth and compute needs. These capabilities allow the company to prevent attackers that may wish to compromise user data, steal credentials, achieve an account take over (ATO), or bypass authorization mechanisms.

With biometrics, artificial intelligence, and advanced neural networks, we learn what makes a user, human

Furthermore, buguroo offers a next-gen static application security testing tool, bugScout SCA, a source code analyzer that detects an application’s risks. As the first step in verification, the firm adds a ‘background loader’ into the line of code that can confirm the identity of the user through biometric analysis. Compatible with the most widespread languages in web and mobile environments, bugFraud runs the Java script on the customer’s web browser. Powered by biometrics and threat intelligence, bugFraud deals with threats such as man-in-the-middle attacks effectively. The subsequent verification steps are based on the type of network the user is using—office, home, or mobile network. The risk factor increases based on changes in the network, location, or the user device. The final check is done on the web content. buguroo can check in real-time for bank’s website manipulation and leverages threat intelligence and deep learning to check for untrusted networks.

buguroo’s transparent solutions secure banking transactions behind the scenes. Having strong partnerships with major banks in the Latin America, Spain, Italy, and Portugal, the company aims to bring their intuitive cybersecurity solutions in the U.S. Although tailored for the banking industry, buguroo’s solutions can be equally effective in securing businesses across industry verticals. 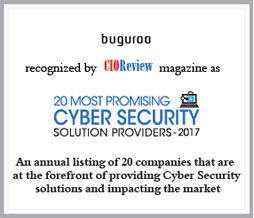